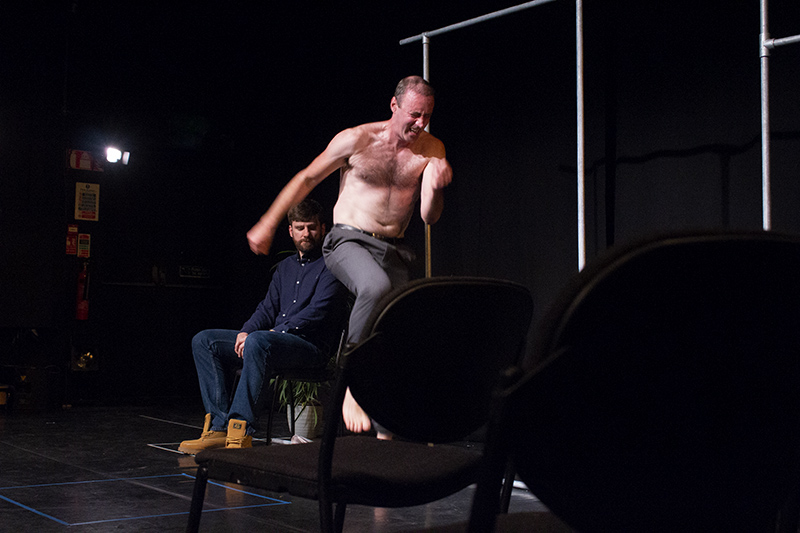 This is a theatre show created from news articles published on the 13thMarch 2012.

Oneday is a timely exploration of the relationship between information and a theatrical performance. It explores what we really can understand about a single day that happened 6 years ago. And more importantly, what does an actor (or indeed anybody) have to do to speak authoritatively on something they haven’t experienced themselves.

Dick Walsh teams up with stand-up comedian and cyberpsychologist James Moran to offer us a new perspective on news in the era of digital fragmentation and superabundanct information by staging news articles originally published on 13th March 2012.

Using an article on the Occupy movement as a starting point, (a movement which directly addressed the misinformation propagated by the elite 1%, and addressed ordinary people’s exclusion from important decision making through the use of this misinformation), this show’s impossible remit is to use the concision of a days news to better understand what is going on in the world.

This project was conceived in 2015 and had its first work in progress performance at Scene +Heard Festival, Smock Alley in February 2016 using 10 performers.

Subsequently we got development funding from the Arts Council for research and development which finished in January 2017.

In April 2017 we did further work in progress at Live Collision Festival at Project Arts Centre.

In 2018 we again did a work in progress at Live Collision Festival. This time presented as a one man monologue.

In September 2018 we presented a full version of the show at the Dublin Fringe. This was supported by funding from the Arts Council. This version of the show uses an actor, Shane Connolly, joined by Dick Walsh on stage as director and Brian Walsh as Drummer.

★ ★ ★ ★ “Against Brian Walsh’s excellent jazz drumming, a nod to the then-fading Occupy movement, they revive a German pension squabble with a hysterical din, discuss the maddening ambiguities around a Syrian massacre or, conversely, deliver deadpan reportage of a US soldier’s killing spree with a frenzy of movement. Through it all Walsh nudges playfully and sincerely at the instability of conviction and certainty. All this happened, more or less.”
The Irish Times

★ ★ ★ ★ “If one is occasionally annoyed that there is no coherent narrative that leads anywhere, this appears to be the point – it serves as an attempt to get us to ask why certain topics are news, how news is brought to the media, and whether the most important stories of the day will be relevant in the future. Post-2016, this point feels as relevant as ever.”
The Reviews Hub

“With such tenacity a reported event, possibly on the verge of evanescence, may find renewed expression onstage. Fittingly in an absurdist play, both theatre and journalism will be made appear useless by the end, but that confusion is surprisingly liberating. It’s the conviction to understand that’s compelling.”
Mussing in Intermissions

Supported by the Arts Council of Ireland