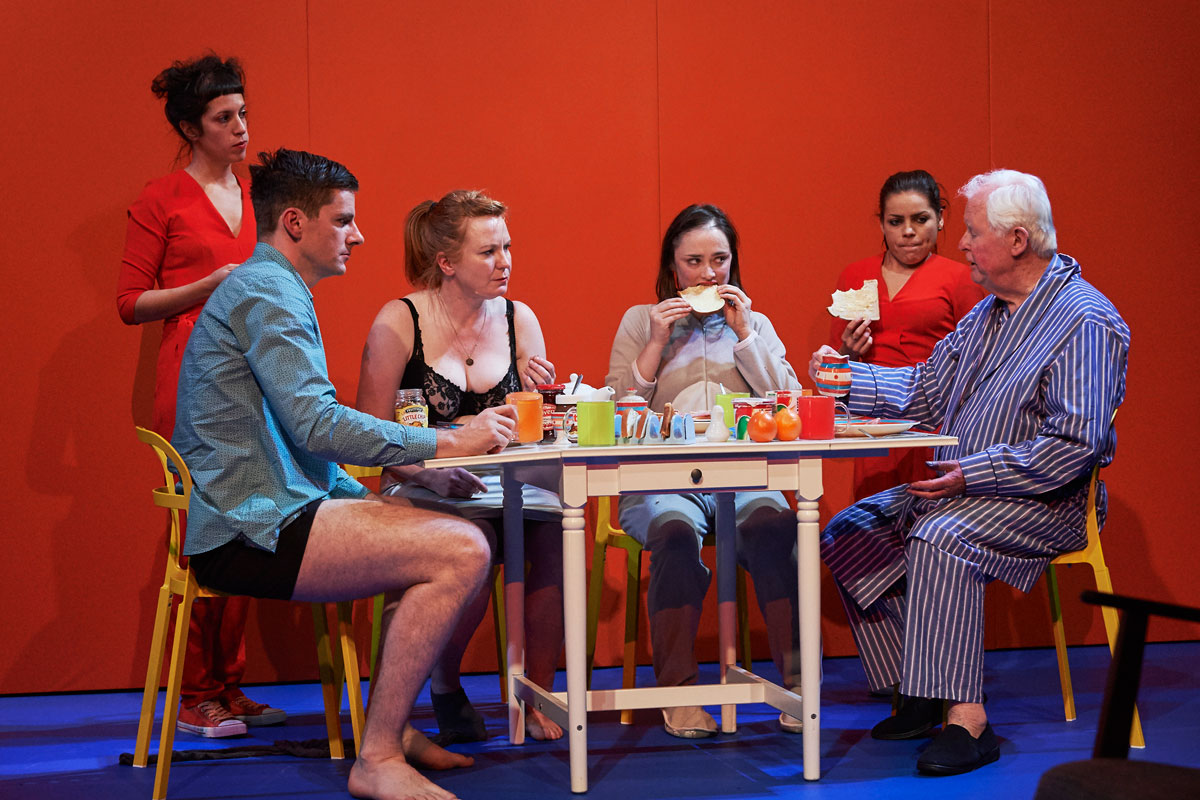 Looking at indeterminacy, randomness and the role of fate, Newcastlewest was written by Dick Walsh and directed by Gavin Quinn of Pan Pan Theatre.

Using a Tolstoy story as a starting point, the script combined a very personal meditation on a complex parent-child relationship with dialogue generated by chance operations.

* * * * ‘In this world without consequence, everyday textures feel unsettling; as McKevitt’s Katie mathematically itemizes her romantic history, Nealon advises his daughter on CV padding, dressing sexy and lying for the sake of a company, while Walsh’s comically beatific Doug rhapsodizes the impersonal connections of computers and Tinder’

“Dick Walsh’s dark and funny script may deliberately court randomness, but there’s nothing haphazard about it. There’s a lively intelligence at work and the dialogue captures the viciousness and selfishness of soul destroying men who mentally, emotionally and physically abuse….Gavin Quinn’s direction deliberately strips away any suggestion of conventional realism with some clever staging and strong performance choices….. But Newcastlewest is anything but normal. It’s a brave, clever and funny production that strives to realise something of a new aesthetic. Does it succeed? Well yeah like, you know babes, totally.”
Chris O’Rourke, The Irish Examiner

“Pan Pan’s Newcastlewest at Smock Alley falls squarely within that company’s primary mission of pushing at the edges of theatrical conventions.
Ian Shuttleworth, The Financial Times

“And in the tiny studio theatre at Smock Alley – as we gather to watch Pan Pan’s truly unnerving 85-minute family nightmare Newcastlewest .”
Joyce McMillan, The Scotsman

“In Pan Pan’s new play, the writer Dick Walsh has created the most memorably obnoxious character seen on a Dublin stage for quote a while. Aongus, played with chilling realism by Des Neaon…a fascinating piece of theatre.”
Fiona Charleton, The Sunday Times

“The characters provide plenty of laughs as they struggle to make sense of the world around them, wavering between the random and the contrived. Realism turned on its head, this entropic piece seeks to measure the disorder in the everyday world and what we lose in trying to do so. If the universe is ordered chaos, then Newcastlewest is a microcosm of that.”
David Keane, The Reviews Hub

“There are some disturbing and invigorating moments and Dick Walsh’s script moves from comedy to drama, always impossible to pin down. To define the script, one could call it a kitchen sink drama, but the joy in this production is its liquid form – Newcastlewest refuses to be about a family in a house, more about the feelings of a family in a house.”
Siobhan Corcoran, Meg.ie